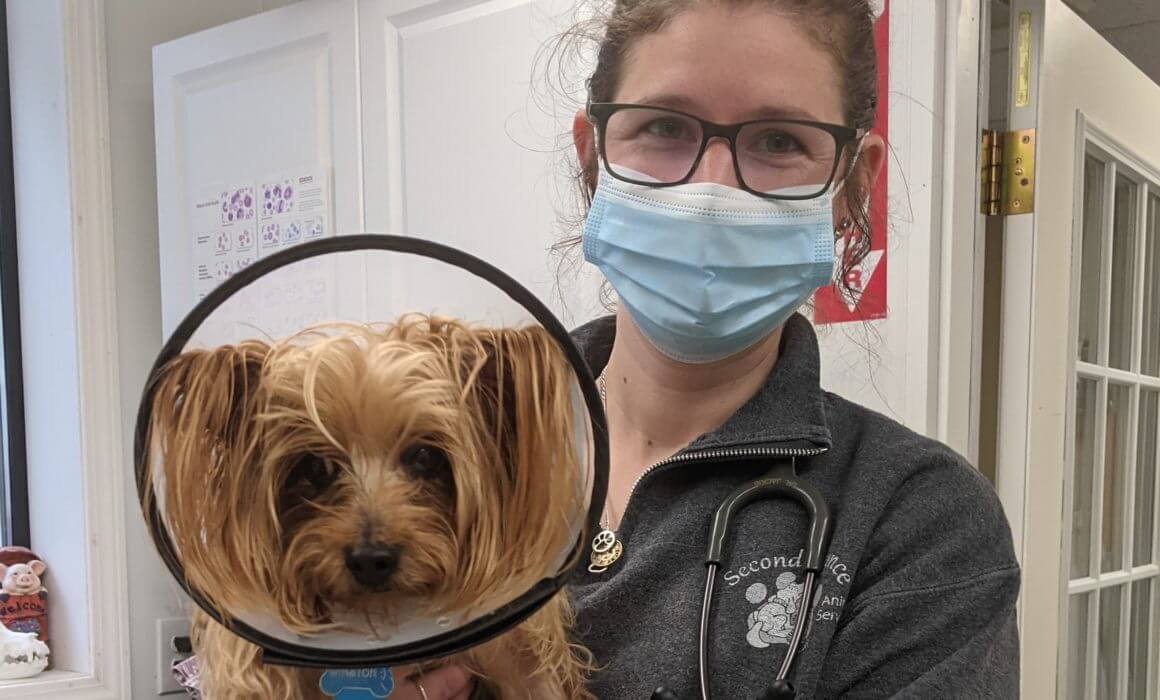 Day after day, a similar scene plays out.  Our veterinarians and vet techs go about their day, seeing pets for checkups and sick visits, or performing scheduled surgeries while reception staff greet pets and pet owners and schedule future appointments.  They may have plans after work, even if it’s just to put their feet up and relax.  When a phone call comes in of a very sick pet, all those plans change.

It was already midafternoon recently when Second Chance received a call about a dog that couldn’t pee due to a blockage of stones.  An emergency facility had temporarily unblocked him, but this was just a temporary fix.  Without immediate surgery the dog would suffer in pain, unable to pee, and die.  Emergency hospitals are stretched to the limit, just like the owner’s budget.  Second Chance was this dog’s only chance.

Suddenly those afterwork plans changed.   Schedules were quickly shifted. A vet and two surgery techs agreed to extend their already long day to perform the surgery after their regular day ended.

The dog arrived late afternoon and was prepped for surgery. The surgery began and it didn’t take long to see that the dog was a lot sicker than originally thought.  There weren’t just a few stones…there were hundreds of tiny stones.  The expected one- to two-hour surgery continued for nearly five hours.  Exhausted, the team plugged along.  The vet carefully removed the stones while the surgery techs monitored the dog’s vital signs.

The hospital director had left for the day just as the surgery began, expecting the staff to be there just a couple of hours.  When the surgery continued into the night, she left her family to provide support.  She picked up snacks and Chinese food on the way back to the hospital.  It was now after 9 PM and the surgery had to continue, there was no stopping.  They had to be sure that no stone was left behind, risking another blockage.

The surgery finally ended a little after 10 PM.  Now it was time to monitor the dog’s recovery.  The staff could finally sit down and have something to eat.  The dog recovered well, the family was ecstatic, and the weary team headed home just before midnight.

This is not an isolated story.  It happens more often than you think.  This dog is alive today and with his family because three staff members gave up their time and their plans to save a life.  I am in awe of the work our staff does at our hospitals and adoption center every day, going above and beyond when necessary to help a pet in need if possible.

Last month, we adjusted the surgery schedule at our largest vet hospital in North Brookfield in response to the current emergency veterinary care crisis that’s affecting pets in Massachusetts and across the country.  We reduced spay and neuter surgery capacity to allow our doctors to provide critical care and surgeries, saving an average of 25 pets every week.  While spay and neuter services are temporarily limited at this location, our Springfield and Worcester hospitals are running at full capacity.