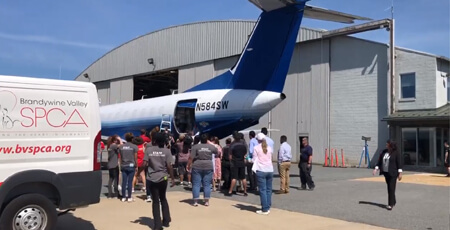 NORTH BROOKFIELD, Mass. (WWLP) – Some homeless pets who were in the path of Hurricane Dorian are now safe in Massachusetts.

Staff from Second Chance Animal Services traveled to Delaware Tuesday to pick up 17 cats that had been evacuated from a shelter in Hilton Head, South Carolina, ahead of Hurricane Dorian. They arrived to Second Chance’s Almost Home Transport facility in North Brookfield late Tuesday night and are now under quarantine for 48 hours.

Second Chance Animal Services Development Director Lindsay Doray told 22News the cats were evacuated from the shelter so that there could be room for other animals that will be temporarily displaced by the storm.

“These animals are now going to find loving homes up here and they’re going to have space to take in those that need it until their owners can get back into the area,” Doray said. “We did actually take in special needs animals. We have a cat here with one eye, we took in a cat that has some heart issues, because those are the ones that really needed us the most.”

Much of South Carolina’s coast was issued a mandatory evacuation order September 2. Doray says they’re on standby just in case they need to take in more four-legged evacuees.

“We’re happy to help out in these sorts of disasters and things because these animals need a place to go,” she said.

With the extra animals, comes a need for donations from the public. Anyone wishing to help with the cost of transport and medical care can learn more by clicking here.

“These animals that are coming in need to have their medical needs met before they are put up for adoption,” Doray explained. “So it does add an additional burden onto our organization and the shelter to care for these in addition to the ones that are already in our care and going to be coming in. We don’t slow down for this, we just accommodate more and kind of deal with the waves.”

Those interested in adopting one of the Hurricane Dorian evacuee cats should fill out an adoption survey by clicking here.

Second Chance Animal Services has a veterinary hospital in Springfield and an adoption center in East Brookfield.